For our second talk of the season, the Traditional Cosmology Society presents a lecture by Julian Goodare, Professor of History at the University of Edinburgh.

Professor Goodare was Director of the online Survey of Scottish Witchcraft, and has published widely on witchcraft in Scotland. His most recent book is The European Witch-Hunt (London: Routledge, 2016).

In his TCS talk, Professor Goodare will review statements contained in Scottish witchcraft trial records, given by people who presented themselves as victims of witchcraft. As recounted in these statements, bewitchment could take many forms: it sometimes affected the victims’ own health; at other times it was the health of a child or other family member, or the health of their farm animals, or their dairying, ale-brewing or prosperity generally. The bewitchment itself was placed within a wider narrative of community relationships, often involving quarrels, and sometimes including threats or curses.

Professor Goodare will focus on how the narrators explained the concept of bewitchment. The key legal point at issue in their testimony was: were these events caused by the suspect’s witchcraft, or not? On this point, the reported accounts varied greatly: some of the supposed victims explained the bewitchment in detail; others told of misfortune, but avoided saying anything about bewitchment. Some victims seem to have been reluctant accusers. At the other extreme, some victims told stories of their own experience of magical events, or even of having encountered the Devil. Seen together, these narratives reveal much about witchcraft victims’ beliefs, and about the remarkable spectrum of nuances they encompassed, a spectrum in which we come to glimpse a connection between the quotidian and the uncanny.

END_OF_DOCUMENT_TOKEN_TO_BE_REPLACED

The Traditional Cosmology Society inaugurates its 2019-20 season of talks by presenting a lecture by Jelka Vince Pallua, formerly from the University of Zagreb, and currently affiliated with the Institute of Social Sciences Ivo Pilar, Zagreb.

Professor Vince Pallua is a ethnologist and scholar of mythology whose interests have long encompassed the position of women in traditional cultures (see, e.g. her recent book The Enigma of Sworn Virgins, 2014), as well as issues of Croatian and Slavic ethnography; Mediterranean studies and traditional cultures of the Adriatic; Morovlachs and the phenomenon of morlachism; Croats in Italy and Italians in Croatia.

In her lecture, Professor Vince Pallua will draw upon a number of recent studies from the Croation context, to illustrate how an increasing number of areas in Croatia have been scientifically identified as sites where pre-Christian Croats left vestiges of their most sacred mythical events. In particular, her lecture will focus on the Proto-Slavic divine trilogy (the gods Perun, Veles and the goddess Mokosh), and present instances in which Mokosh appear to have been substituted by the mythical character Baba (the word ‘baba’ in some Slavic languages indicates a hag, ugly old woman).

Prof Vince Pallua will discuss two figurative representations of Baba, the only ones in figurative form known to-date, which she herself discovered in Istria, the southwestern part of Croatia. In Vince Pallua’s view, 15th century Croats in Istria kept alive the memory of the supreme Proto-Slavic goddess Mokosh, herself a female deity of fertility and the patron of female chores and craft (especially spinning and weaving), eventually incorporating Mokosh’s mythological legacy into Marian veneration.

END_OF_DOCUMENT_TOKEN_TO_BE_REPLACED

On Friday March 22nd, Dr Lucie Vinsova will give a public lecture entitled ‘Keepers of the Universe’. Dr Visnova is a Czech scholar hailing from Masaryk University in Brno, and has conducted fieldwork with various indigenous communities living in Colombia, both in the mountainous areas of the South West and in the Sierra Nevada de Santa Marta, in the North.

In her lecture, Dr Vinsova will describe the special relationship these ethnic groups have with water. She will explain how indigenous communities in those areas have always appreciated the crucial role played by water in ensuring the well-being of their society and life in general. Indeed, the notion of human responsibility in managing such precious resource can be traced in a number of water-related myths: Dr Visnova will provide insight into various mythological and cosmological motifs, all linked to the importance of water.

She will also comment on more recent developments, however. With páramos (alpine tundra ecosystems, which constitute the main source of water in the Colombian Andean areas) now continuously threatened by mining industries, and with climate- and civilization- related changes altering the delicate cycle of water, members of those communities – she will argue – are increasingly struggling to fulfil their cultural obligations as “Keepers of the Universe”.

THE MEANING OF MAYA MYTHS

In his lecture, Professor Aleksandar Bošković will examine the ways in which the Classic Maya have been studied, and the issue of whether it is possible to trace any analogies with the present-day Maya. The Classic Maya built a fascinating civilization, whose belief-system centred on in the inevitability of change, as well as on a complex set of deities and spirits. The rulers had a special place in this microcosm, as they were believed to be direct descendants of the deities responsible for each city-state. Recent advancements in the decipherment of ancient Maya writing have enabled us to gain unprecedented insights into the structure and organization of their societies and spiritual tenets. 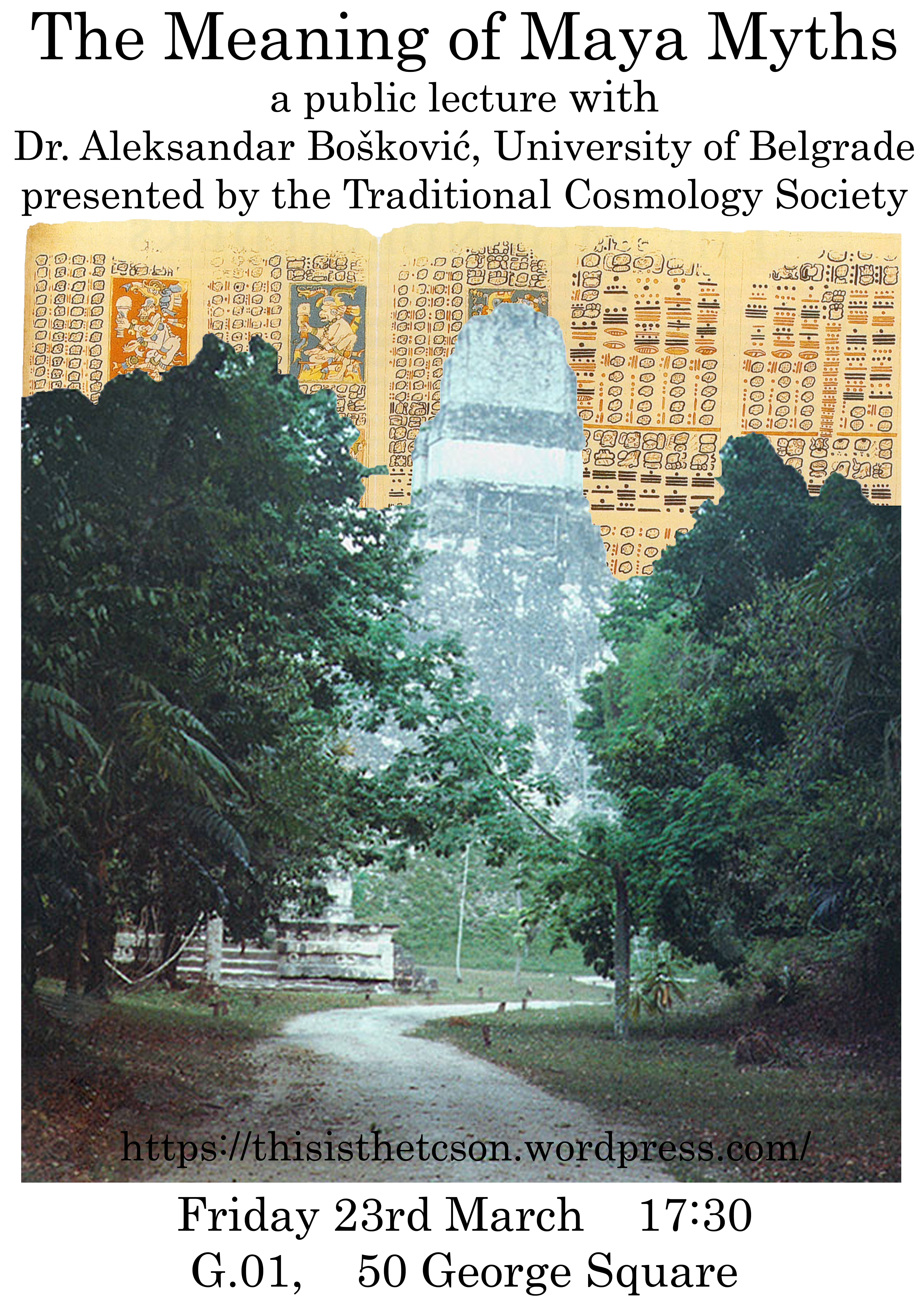 Professor Peter Jackson is director of History of religions at the Department of Ethnology, History of Religions and Gender studies at Stockholm University. He specialises in the philological study of Indo-European religions, with a special emphasis on ancient Indian and Iranian religions, the religions of ancient Greece and Rome, and Old Norse religion. He has also undertaken the daunting comparative task of exploring how recurrences in the earliest cultic and heroic poetry of ancient India, Iran, Greece, and the Germanic world may provide clues to the common past of these traditions.

In his lecture, Prof. Jackson will examine the mutual dependence between a rudimentary warrior elite and increasingly specialized suppliers of ritual in proto Indo European society. He will explore deep layers of comparative evidence, in order to demonstrate the means by which patron-client relationships in ancient Greece, pre-Achaemenid Iran, and Vedic India paved the way for new notions and sensibilities, including theoretical means of living and the promise of a happy afterlife. Special attention will be drawn to the names and mythical characterizations of Orpheus and the Vedic so-called R̥bhus (r̥bhú- [pl. r̥bhávaḥ]) as idealized projections of the itinerant poet-priest.